Almajdouie safely executed a challenging job of shifting three huge evaporators in Rabigh, in the Kingdom of Saudi Arabia, simultaneously.

Doosan Heavy Industries, a Korean based company specializing in Power Projects, had tied-up with Almajdouie for all land transportation job in Kingdom of Saudi Arabia. The scope involves haulage and positioning of three evaporators in Rabigh, in the Western Region of the Kingdom, where DHI's Power Project construction is underway.

The evaporator started from the jetty at Rabigh Port to Rabigh PP2 Project Site travelling a distance of 35 Kilometers. The size of each evaporator was 34.2meter in Length, 13.20meter in Width and 9.51meter in height and its total weight is 460.60 tons including all steel beams. The cargo was received at PetroRabigh's laydown area with specialized arrangement. 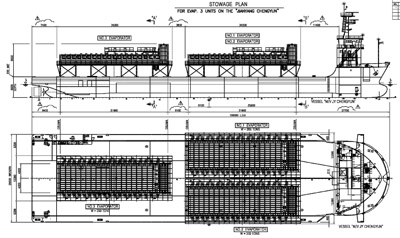 The barge with huge evaporators that docked at Rabigh Port were rolled on-shore by Almajdouie's unmatched expertise. SPMT (Self-Propelled Modular Transporter) had to move-in slowly at turtle speed to carefully maintain the balance on both side of the barge. Ballasting – balancing the equipment on the barge with counter weight – was being done concurrently by the ship crew. All three evaporators rolled out from the barge safely.

Another herculean task came unexpectedly in the form of on-going road construction work on the stipulated route; due to which a new road had to be laid down on the restricted area of PetroRabigh, all the way upto the main entrance of the site. Heavy equipment were pressed into service to develop access path for SPMT. Despite initial hiccups, the first evaporator reached its destination within 24 hours of departure from Port.