Globalink continues to expand in Defense, Aviation and Military Logistics

Globalink was subcontracted to relocate Armored Personal Carriers and other Military Vehicles including equipment of Mongolian Army (United Nation Peace Keepers) from Western Africa back to Mongolia. Considering that special permissions were required for the military cargo which was mostly out of gauge, Globalink choose routing via Baltic Sea with on-carriage by dedicated block train service under Russian military escort to Mongolia. Globalink staff in Estonia, Russia and Mongolia closely coordinated the laborious process of obtaining special permissions through Russian and Estonian territories including arrangements of special railway platform and armed military escort in record time to make this project successful.

Globalink Afghanistan has been making headlines for their involvement in various defense related contracts. United Nations recently contracted Globalink to deliver several rough terrain vehicles from Afghanistan to Kyrgyzstan. Globalink’s network of offices in Afghanistan, Uzbekistan and Kyrgyzstan ensured smooth transportation of cargo from Kabul via Uzbekistan to its final destination in Kyrgyzstan.

Although this was not one of the biggest projects Globalink has handled in the region but our newly established Northern Transit Corridor service came in handy for the execution of this project. Northern Transit Corridor service has been established by Globalink to connect Black Sea via Poti – Baku – Aktau – Hairaton to Afghanistan. Having own offices and terminals in Poti – Baku – Aktau – Hairaton and close cooperation with regional railway companies, Globalink is one of the most active multimodal transport operators on this route.

While Mongolian Peace Keepers were on the move, the Kazakhstan Ministry of Defense contracted Globalink for the delivery of Special Aviation Project consisting of military helicopter’s, assembly modules and engines from Europe to Kazakhstan. On the last minute, Globalink was advised that helicopters and accessories were to be transported from Europe to Kazakhstan within 48 hours due to urgent demand of the assembly facility which was to be visited by the President of Kazakhstan.

With no regular freighter connection to Astana, Globalink in-house air chartering team swiftly arranged Boeing 747-400F and delivery of cargo from various European facilities to Frankfurt airport. While B-747F was on its way to Astana airport, Globalink Astana team had already prepared all the customs formalities and positioned special trailers for the final delivery of cargo to the assembly facility. The entire door to door operation took little less then 48 hours leaving all our customers fully satisfied with Globalink JIT planning. 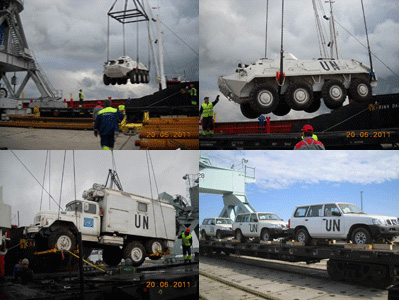